An Open Letter to Hasbro 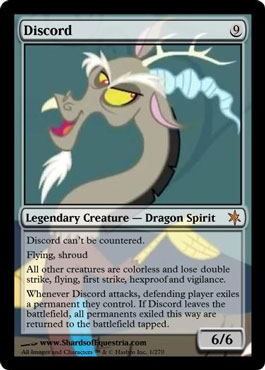 You own companies which make some fantastic games, as do you yourself. You have fingers in multiple entertainment pies, and some people are perhaps unaware of exactly how versatile your portfolio of revenue streams actually is. And I realise that you are a business, and as such it is your job to generate profit.

I’m forced to ask, then, whether shutting down your own fans is contributing to that profit.

Let’s talk about Shards of Equestria. This was, for those who don’t know, a Magic: the Gathering / My Little Pony fan project which had a significant amount of time invested into it. It was fun. People love MLP! People love Magic! Combining the two actually took a great deal of thought and playtesting, but eventually the work was done, and the cards made available for people to download and print.

What’s that, you say? A Cease and Desist letter?

I’m not going to rail and whine. Both MtG and My Little Pony are Hasbro’s copyrights. But nobody was making money from Shards of Equestria, and no funds were being diverted away from Hasbro products – in fact, many Pony fans here went so far as to say that Shards of Equestria got them into Magic: the Gathering.

That’s right. This fan project brought you new customers. Perhaps not many, but those people have friends, and we know how Magic spreads. And those new customers weren’t all in one place, so that’s several new customers with several non-intersecting groups of friends who discovered your games through the love and hard work of fans. Quick. Better shut it down.

And so the world turns, and we come on to Cockatrice. From cockatrice.de:

I have received a letter from a law firm representing Hasbro Germany, expressing a strong feeling of dislike for our project, backed up with legal claims. Regardless of whether the claims they are making are factually correct or not, I have agreed to shut down the project in its current form. As soon as this is completely sorted out, development work will be put into keeping alive the code base in such a way that it can be used for other purposes.

I deeply appreciate all the support from the community and hope to see all of you again soon. I will keep you posted if there are any news.

If readers weren’t aware, Cockatrice was a fan-made, free product which – in a rudimentary fashion – allowed them to play Magic online with anyone, anywhere, without paying a penny for either the platform or the cards. This is a little more touchy: I would say there’s a very valid argument that this poses a genuine risk to profit, as if people can play for free why would they pay?

Let’s face it, this is about MtG Online, a platform which is barely above Cockatrice in any technological sense – oh, other than the back-end for handling the money, of course. That part’s extremely robust. But the part where MTGO actually works? Not so much! Let’s check out MTGO’s top recent bugs:

I have no doubt that there are people who play Magic on Cockatrice and don’t spend money on cards. I also have very little doubt that with Cockatrice unavailable, they won’t suddenly be rushing forth to spend money on either MTGO or booster packs: they will simply stop playing and find something else that’s free.

I have no doubt that some people on Cockatrice spend a great deal of money on cards, and will continue to do so with or without Cockatrice, but that Cockatrice enabled them to test their decks against friends and strangers alike without needing to drive an hour to get to their nearest game store / clum / FNM. Those people are the players who don’t grasp – quite rightly – why they should be forced to pay twice to own the same cards.

Perhaps some small percentage of Cockatrice players will shrug and think to themselves “Well, all right. I better subscribe to MTGO!” But I genuinely doubt this.

Most people I know – both personally and virtually – used Cockatrice to test deck ideas before investing in the cards. Will we rush forth and buy a booster crate or complete playsets for every set now so that we can experiment at home? No, that isn’t going to happen. If we could afford to drop four thousand dollars a year into a card game, we’d also be playing MTGO already. I myself have to drive at least half an hour to get to other MtG players, and while Americans might wonder what the deal is with that, for us Brits an hour out of our day lost to driving is a waste of time. Being able to play with those same people while I dink around with deck-building ideas saves me:

It’s no idle threat when I say that the removal of Cockatrice may well mean that I cannot play Magic any more. I can’t afford it. I’m a writer, and I need to eat, so while until now I’ve been ready to place eBay bids on cards which I have tried, tested, and know that I want to have, I am not in a position to buy endless boosters in the hope of a playset, and I am not in a position to buy playsets only to find they don’t quite interact with other cards in the way that I had envisioned.

And let’s look at this from yet another perspective: Cockatrice wasn’t only for Magic. It supported a variety of CCGs, of which Magic was only one, and yet you, Hasbro, are the only company to issue a Cease and Desist. Perhaps it’s because those companies do not have comparable online offerings, and perhaps it’s because those companies do not see Cockatrice as a threat. It is, after all, free marketing; a tool your existing customer base can use to draw new customers toward your product. “Try it online for free, and if you like it, let’s go to a Friday Night Magic!”

So, we come to the crux of this letter: Yes, these properties are legally yours. That was never in dispute. Yes, you are well within your rights to defend your properties. And, yes, I doubt that losing one Magic player who never attended a PTQ let alone a GP is hardly going to make you lose any sleep.

All I can really do is ask you, please, to consider whether what you do attracts customers, or turns them away. What you do to retain short-term profitability may be harming your brand’s image in the long run.

It may not, of course. Grand Prix and Pro-Tour events are getting larger by the year. The money is certainly there. Perhaps one lone customer having to step away from a game she not only enjoys but is actually getting quite good at just doesn’t matter.