Poor Stardock had a hell of a time after releasing Elemental. The game was rushed out the door before it was ready, and the premature infant died wailing merely hours after plopping onto customers’ hard drives. Rather than kicking the rotting carcass under a rug and pretending nothing had happened, they did the far braver thing: They rebuilt it. Made it stronger, better, faster.

Fallen Enchantress is iteration 2.0, and is a mixture of turn-based strategy and RPG. While you are struggling to build a civilisation from grass and twigs, your heroes are rampaging around the landscape looting wagons and completing quests. 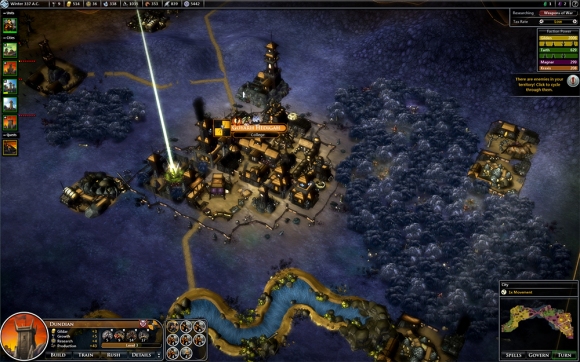 The trick which I have yet to master (or even apprentice) is balancing building with research. You see, certain types of cities are good at particular things, and attempting to have a war-focussed city pop out some research buildings is arduous at best, impossible at worst. You set the nature of your fledgeling cities very early on in their lives, so an early mis-step can leave you with your Fortress city in the butt-end of nowhere, and your University towns on the border with very militant neighbours.

After my third attempt (two failed civilisations, dead so fast it was breathtaking) I managed to build a small empire. And I mean small.

Look at that. I haven’t even explored the entire world, and I occupy that blue bit on the right. I don’t even know where the guy who’s winning is located! 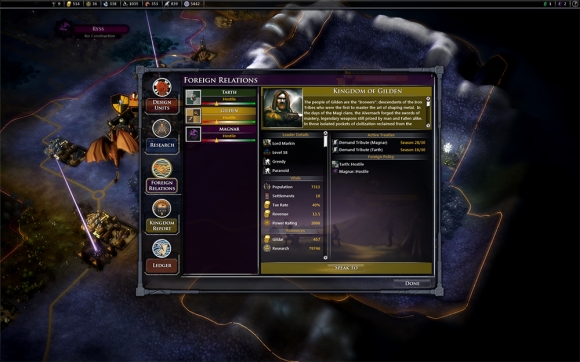 My only saving grace is that while they all hate me, they all hate each other too, and I’m too small to squash. Still, this is hardly what I’d call winning.

A tutorial teaches the basics of building, training units, and casting spells. It shows you how the turn-based combat works if you want to control battles blow-by-blow instead of allowing them to auto-resolve. It doesn’t spend a great deal of time on the research trees, how to generate resources and income, or how to grow your cities. In short, Fallen Enchantress waves training wheels at you, then tosses them into a deep, dark chasm while cackling.

Once you start losing, the puppy-kicking begins as your more powerful neighbours’ protection rackets kick in. But here’s the thing: I know what I did wrong. And I can avoid it in future.

Fallen Enchantress doesn’t forgive mistakes, but at least your mistakes are clear once you make them. Here, for example, I got excited at the idea of expending my Influence to take over a neighbouring city. The mistake? It cost so much Influence that I struggled to regain it. Whereas I’d been a political powerhouse with a small nation beforehand, I suddenly became overextended and with negligible political power. And to cap it all off I lost the city a few turns later anyway. The rest of the game was a scrabble to bribe nations into war with one-another and leave me in peace.

There are plenty of pages of information in-game to show you what’s going on in your Kingdom. Mine largely says “Well, we’re buggered, sire” in a variety of ways. 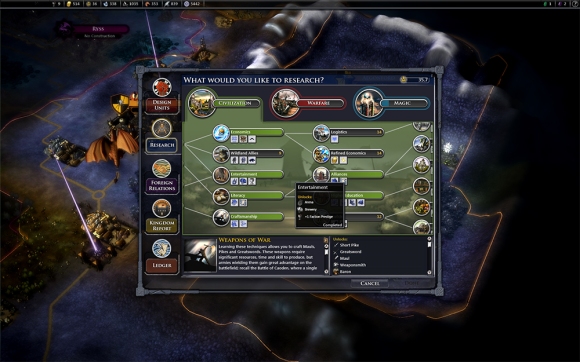 There are three research trees: Civilization, Warfare and Magic. I get the feeling that the NPC players have insider knowledge here while I’m researching anything and everything. Even on “easy” those other Kingdoms are throwing up one-of-a-kind buildings and monuments while I’m struggling to grow enough grain to feed my cities.

And yet with the repeated beatings, it’s a phenomenally addictive game. The determination to figure it out and improve is strong, and I don’t often bother with games which have a steep learning curve. I think the turn-based nature means that you have time to learn. You are never rushed into a decision or a mis-step; every one you make is entirely your own.

Overall: 8/10. I absolutely recommend this, if strategy is your thing.