I’m a heartless bastard at times, so I decided to focus on this particular pairing: 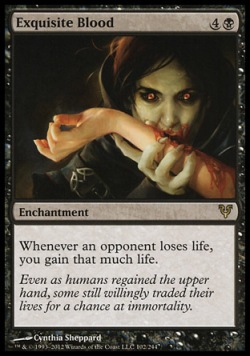 With that in mind, it’s time to make a decklist!

It’s deceptively simple: Survive long enough to get Exquisite Blood and Vizkopa Guildmage in play together. Drop your 1WB into the Guildmage’s second ability, then trigger a lifegain.

The lifegain options are essentially:

If your opponent sideboards, then it’s possible they have some emergency Enchantment-destruction lurking around, in which case it’s time to go full-on Extort. Side in the High Priests to give them serious pause for thought about attacking. Get O-Rings and One Thousand Lashes in. Throw out your big beasts and the Gift of Orzhova. Give them so many Enchantments to waste Naturalizes on that sooner or later they run out, all while you Extort to death.

That’s the logic, anyway. Now I need to test this puppy out!