It’s that time: Wizards have released the full image spoiler for Gatecrash, and now we have five days to think before the pre-release.

Obviously we can’t plan a deck. It’s sealed, and we only know for sure what one of our 90 potential cards will be. But I’m going Orzhov, and will absolutely splash if I pull a bomb that’s worth it, so let’s look at what’ll make me think twice. 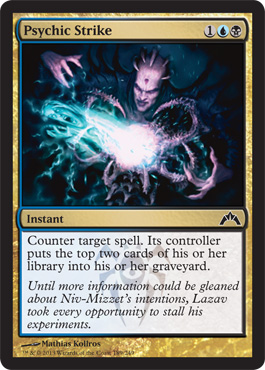 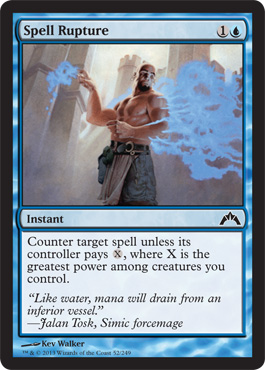 I will splash blue in a heartbeat for any of these. I think counterspells are going to be my only real defence against bombs, and Aetherize will dispose of tokens and pesky +1/+1 counters in a flash. Psychic Strike has a handy side-effect, but I won’t be able to capitalise on it, because I’m not playing Dimir. Spell Rupture is far tastier, as I’m guaranteed to have a 4/4 body in the deck from the Treasury Thrull. 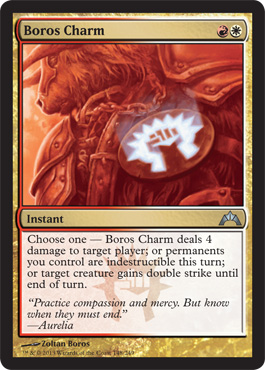 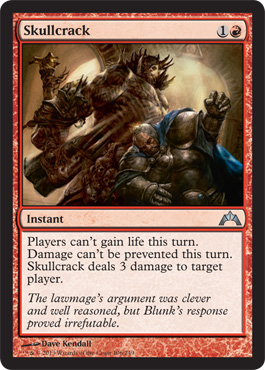 If I don’t pull blues worth splashing for and any of these come up, I’ll certainly think about adding red to the mix instead. Boros Charm is a board-saver for all those precious lifelinking, extorting creatures. Skullcrack is a cheap direct damage that can also give a nasty surprise to opposing Orzhov players, and Martial Glory could be the coup de grâce to help a blocked creature survive and add more power to one which broke through (or has lifelink).

And for the Orzhov? 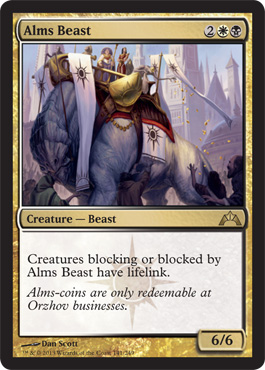 I’m going to be pleased as punch to pull any of these! The Cartel Aristocrat is a nice enough bear, and can help shed harmful auras. I’m reluctant about the Alms Beast, but it *is* going to kill much of what it blocks, and coupling it with either Skullcrack or the Vizkopa Guildmage should counteract its offputting ability. If I can field both the Alms Beast and the Vizkopa Guildmage, then I don’t mind donating lifelink to something I’m about to kill if I can farm 6 life off doing so.

I love all three, and they’re cheap commons. Just look at them! Beckon Apparition gives a 1/1 flying Spirit token and an exile, for W/B. Shadow Alley Denizen is 1/1 body and potentially unblockable creatures, for B. Contaminated Ground gives you a way to slow your opponent down and make them pay if they need the speed for 1B. These are all very sexy cards. I will include these without a second thought. 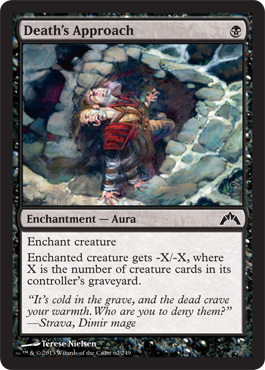 Executioner’s Swing is Gatecrash’s 2CMC single-target removal. As with all black removals at this cost, it has a limitation. Well, sadly it actually has two, and it’s no guaranteed removal. But it’s a start, and it’s seriously worth including: we need all the removal we can get. Death’s Approach is fantastic, and will force your opponent to play around it if you slap it on the things they’re desperate to keep. It can defang Battalion effects, reduce Simic bonuses. Lovely! And the Balustrade Spy is a handy 2/3 flier with a handy grind built in; I might go for him if I also splash blue for Psychic Strike, but otherwise I may well pass. 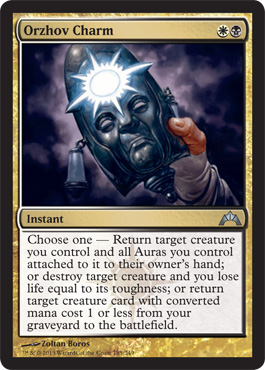 I don’t know what to make of the Orzhov Charm. Being able to rescue a creature and all my auras could be useful. Throwing two mana to retrieve a 1CMC creature to the battlefield seems reasonable, but not exciting. Vitally, though, it’s another removal option, and it costs me the life that I should be making back with Extort and Lifelink… So it’s definitely a keeper, but I think I’ll have to see it in play before I’m completely sold.

Glaring Spotlight, of course, is just amazing. Could even be a game-winner. There are quite a few pesky hexproof creatures in Gatecrash, and being able to bypass that will be extremely handy. More handy, of course, is giving your whole army hexproof and making them unblockable for the turn. Could be the key to get past a wall of Soldiers or FrogCrocodileMutants.

Honourable mention goes to Thespian’s Stage. It could, at the very least, be a very useful mana fixer. But I think it’ll be far sexier beyond Sealed and into any Constructed format you go to. Copying a Cavern of Souls? Or a Gavony Township? Maybe a Vault of the Archangel? All very tasty indeed.

Are there any cards you’ll pick without question this weekend?

2 thoughts on “Assemble the Legion!”