There’s a new kid on the wargames block, and he’s kicking over the chairs and scribbling his name on the walls: DropZone Commander. Well, it might not be quite like that, but what it is doing is giving us a great new game for which you can buy all you will ever need for £265.

£265 for dropships, tanks, troops, a commander, a deck of command cards, custom-cut KR-Multicase foam trays, and an aluminium carry case.

Don’t adjust your eyes. You didn’t misread that. Of course, someone’s going to have to pop £15 on the rulebook, too, but that’s it.

The minis are incredible. At 10mm scale you might worry that things are going to get clunky, but Dave Lewis of Hawk Wargames has done an amazing job. Vehicles were sculpted digitally, and are so detailed that tanks have tiny moveable parts. Troops were done the old-fashioned way – by hand – and yet these absolutely miniscule figures are superb (and too small for my 50mm macro lens to get a fix on).

It’s called DropZone Commander with good reason: The scale may be 10mm, but your battlefield is, for medium-sized games, 48X48mm. That’s only two feet shorter than your average 40K table, and your troops are not going to run their little legs off crossing all that on their own. Even wheeled / tracked vehicles are sitting out in the open for too long. No, you’re going to need to airlift your army into position with Dropships, or they aren’t going to make it.

We’ve used books for buildings in this game: Dropships in flight are measured as being 6″ from the table surface, so it’s important to know how tall your structures are. But DZC tactics can also rely heavily on destroying buildings, so books gave us the ability to remove layers and leave the foundations in place. Hawk Wargames has – for free, mind you – gorgeous buildings that you can download from their website and print onto stiff card.

Yes, again! I’m not having a seizure, I’m not making this up! A games company which gives you free support from its website, and even encourages fan-made extras! Stick with me on this one.

The armies from this particular game were the United Colonies of Mankind (UCM), and PostHuman Republic (PHR). There are currently four armies in total: The UCM are the remains of the once-great Human empire; the PHR split off and are now cyborgs; the Scourge are body-thieving parasites; and the Shaltari are ancient and advanced aliens. Flavour-wise the UCM are sorta kinda Imperial Guard-ish, the PHR are a bit Tau-ish, the Scourge are Tyranid-like, and the Shaltari are vaguely Eldar. Play-styles, though, are entirely different. 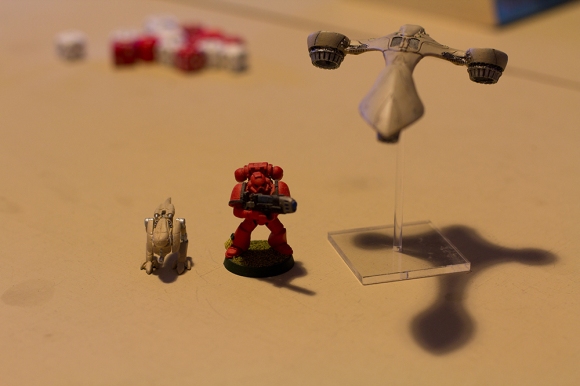 The obligatory size comparison shows a Tactical Marine between a PHR Janus Scout Walker, the smallest Walker the PHR have, and a PHR Neptune Medium Dropship.

I like it. I like it so much that I’m picking up a Premium Shaltari Mega Army in the next few weeks. In fact, I’ve been terribly cheeky and asked Mr. Troo if I can have it for my birthday. So you can expect to see a lot more of DZC on this blog over the coming months (or years).